Welcome to the fascinating world of Collecting Paper Money!

A primary purpose of this website is to introduce new collectors to the many pleasures of collecting paper money.

This website is sponsored by the Society of Paper Money Collectors (SPMC.org) as part of its educational mission to promote the study and appreciation of paper money and related financial history. This website is an ongoing work in progress and will be updated as new information becomes available. See What's New for information on the latest updates to this website.

Listed below are the primary collecting categories with a brief overview, image of a note, and a link to a home page with further information and research resources for that collecting category. The sidebar on the left has links to each of these collecting home pages, along with other useful links. The bread-crumb links along the top provide links to the last four wiki pages you have viewed, to help with navigation as you browse this website.

If you are a newcomer to Collecting Paper Money, be sure to look over the Getting Started page for ideas and advice to help you get started with this wonderful hobby, along with answers to some Frequently Asked Questions. 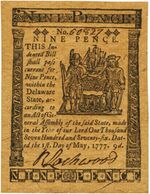 The earliest U.S. Colonial Currency was issued by the Massachusetts Bay Colony in 1690 to pay for a military expedition to Canada during King William's War. Between 1690 and 1788 all 13 of the original colonies plus Vermont issued currency denominated in pounds, shillings and pence. Some of the Pennsylvania, Delaware and New Jersey notes were printed by Benjamin Franklin, and some of the Massachusetts and New Hampshire notes were printed by Paul Revere, which enhances their value.

U.S. Obsolete currency generally refers to bank notes and scrip issued between 1782 and the late 1860s that were not Federal issues. These notes are obsolete in the sense that they can no longer be redeemed.

There are two major types of Obsolete currency:

The local aspect of Obsolete bank notes and scrip leads many collectors to collect notes from their home town, county or state. The often beautiful designs of the bank notes, that were issued in many different & unusual denominations, also make for interesting collecting possibilities.

The Confederate States of America was born February 9th, 1861, when a provisional government was created at Montgomery, Alabama. Over the course of the Civil War, seven series of Confederate notes, consisting of 70 different Types, were printed. These started in 1861 with the famous Montgomery issue of $1000, $500, $100, and $50 notes in very limited quantities. The last series in 1864 issued millions of notes in nine denominations from 50cents to $500. Given the rich history behind these CSA notes, this is a popular collecting area.

Fractional currency was issued during and after the U.S. Civil War due to the hoarding and shortage of gold, silver, and copper coins. Fractional currency was printed in five Issues in denominations of 3, 5, 10, 15, 25 and 50 cents. All denominations were fractions of a dollar, hence the name Fractional Currency. The notes were printed from August 21, 1862, until February 15, 1876. The first issue of fractional currency was called Postage Currency since these notes had as their central vignette the five and ten-cent stamps of the day. A basic Fractional Type set would consist of 24 notes (25 counting the Grant/Sherman specimen). Since the print quantities for the five Issues were generally large, many of these notes are easily available at modest prices in circulated condition. Given their unusual and historic place in U.S. monetary history, colorful and distinctive designs, along with good availability and modest prices, Fractional Currency could be a great first paper money collection to pursue.

National Bank Notes were issued between 1863 and 1935 by 12,631 National Banks in all 48 states (in existence at that time), as well as the territories of Alaska, Hawaii and Puerto Rico. All National Bank Notes show the town and name of the issuing bank and were signed by the local bank officers. Since these notes represent 'Hometown Bank Notes', with historical ties to the town/bank that issued the notes and the bankers that signed them, many collectors avidly collect notes from their home town, county, or state. Four distinct Series of Large Size notes, with 9 different Types, were issued between 1863 and 1929, and one Series of Small Size notes (with 2 different types) was issued between 1929 and 1935.

U.S. Large Size currency was issued from 1861 until 1929 when the U.S. Government switched over to the small size notes. Included in this category are large size Demand Notes, Legal Tender Notes (United States Notes), Silver Certificates, Treasury (or Coin) Notes, Federal Reserve Bank Notes, Federal Reserve Notes, and Gold Certificates. These types include some of the most artistic and beautifully designed notes ever issued by the U.S. Government and are one of the most popular paper money collecting categories. Even if your primary paper money collecting interest is elsewhere, many collectors eventually add a couple of favorite U.S. large size type notes to their collection.

Depression Scrip refers to the variety of non-national and local currencies issued on an emergency basis by banks, municipalities, corporations, barter/self-help groups and even private individuals during most years of the Great Depression (approximately 1932 to 1938). While the terms and circumstances of these issues differed greatly, their common goal was to provide some relief for increasingly dire economic circumstances. People experienced these circumstances as a shortage of money, which the various scrip emissions attempted to address.

Panic Scrip refers to bank-issued circulating media that sought to remedy shortages of official currency during periods of financial stringency (what were commonly called “panics”) that occurred episodically throughout the 19th and early 20th centuries, prior to the establishment of the Federal Reserve System in 1913 and federal deposit insurance twenty years later. Most of this scrip was issued during the Panic of 1907, although smaller amounts were issued during the Panic of 1893 as well as briefly during 1914, at the outset of World War I. Panic Scrip almost always took the form of clearinghouse certificates or checks--temporary currency issued by bank associations and collateralized by their members' assets.

Both Depression Scrip and Panic Scrip were extremely local forms of emergency money that are typically collected according to the type of scrip, who issued it, or the place where it was issued.

Before 1946, U.S. military personnel stationed abroad were paid in the currency of the country where they were stationed and could convert that local currency into U.S. dollars as needed. But this process facilitated black market activity. Also, if local currencies depreciated, this would erode the value of their pay. To address these problems, a system of Military Payment Certificates was developed in 1946 and used continuously until 1973 in at least 22 countries. MPCs were denominated in dollars, and usable only in military facilities. Military personnel were paid in MPCs and prohibited from holding U.S. currency. Periodically, to stifle black market activity, a new series of MPC was issued to replace the series currently in use. On these unannounced conversion days, personnel would be restricted to their compounds and only authorized users of MPC could convert their MPC to the new series. After conversion day, the old series of MPC was worthless. As a result, the supply of MPC available for collectors primarily came from military personnel that failed to convert some of their MPC, or from black marketers who were unable to convert any MPC they happened to be holding on conversion days. 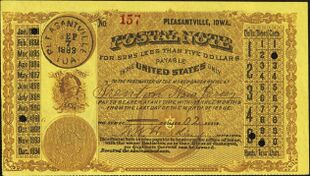 U.S. Postal Notes were specialized money order successors to U.S. Fractional currency. They were created in 1883 so people could safely and inexpensively (for a three cent fee) send sums of money under $5 to distant places. Between 1883 and 1894, some 70.8 million Postal Notes in six Types were issued, used as intended, and then destroyed. A current census lists almost 2,200 U.S. Postal Notes that have survived for collectors to enjoy.

Three major types of Canadian currency have been issued since the 1790s: Chartered Bank notes (1790s-1940s), Dominion of Canada notes (1870-1924) and Bank of Canada notes (1935-present). There are also several other smaller categories including Province of Canada, Newfoundland, and Prince Edward Island notes.

World Currency offers an incredible range of collecting possibilities. With almost 200 countries currently issuing bank notes, just trying to collect one note from each country offers an interesting challenge. Expand that to include other countries from the past for even more of a challenge. In addition to collecting by country, collecting by theme is limited only by your imagination. Collecting historical bank notes and researching their stories can be a very rewarding way to collect. Collecting World Currency can also be an excellent option if you have a limited collecting budget.

Retrieved from "https://cpm.mywikis.wiki/w/index.php?title=Main_Page&oldid=2345"
Cookies help us deliver our services. By using our services, you agree to our use of cookies.