Until 1946, U.S. military personnel stationed abroad were paid in the currency of the country where they were stationed and could convert that local currency into U.S. dollars as needed. But this process facilitated black market activity. Also, if local currencies depreciated, this would erode the value of their pay. To address these problems, a system of Military Payment Certificates was developed in 1946 and used continuously until 1973 in at least 22 countries. MPCs were denominated in dollars, and usable only in military facilities. Military personnel were paid in MPCs and prohibited from holding U.S. currency. If they needed to buy something in the local civilian communities, they could exchange their MPC for local currency, but could not convert local currency back into MPCs or U.S. dollars. Periodically, to stifle black market activity, a new series of MPC was issued to replace the series currently in use. On these unannounced conversion days, personnel would be restricted to their compounds and only authorized users of MPC could convert their MPC to the new series. After conversion day, the old series of MPC was worthless. As a result, the supply of MPC available for collectors primarily came from military personnel that failed to convert some of their MPC, or from black marketers who were unable to convert any MPC they happened to be holding on conversion days. Because MPC were not issued as formal obligations of the United States Treasury, they can no longer be redeemed for currency.

Between 1946 and 1973, Military Payment Certificates were issued in 13 Series with denominations from 5 cents to $20. In addition, there were two more Series (691 and 701) that were printed but never issued. 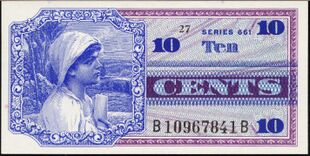 This 2016 Paper Money article by Carlson R. Chambliss provides a detailed overview of the relative rarity of the various MPC Series.

This 2016 Paper Money article by Benny Bolin discusses collecting fractional MPCs, specifically the 5-cent denomination, with details on each of the 5-cent issues.

Between 1946 and 1973, Military Payment Certificates were issued in 13 Series with denominations from 5 cents to $20.

This Index page has links to all articles on U.S. Military Payment Certificates that have appeared in the Paper Money Journal since the first issue in 1962.

This is a link to the Heritage Currency Auction Archives for MPCs.

Retrieved from "https://cpm.mywikis.wiki/w/index.php?title=Collecting_U.S._Military_Payment_Certificates_(MPC)&oldid=2271"
Cookies help us deliver our services. By using our services, you agree to our use of cookies.