Fractional currency was issued during and after the U.S. Civil War due to the hoarding and shortage of gold, silver, and copper coins. The notes were printed from August 21, 1862, until February 15, 1876, in denominations of 3, 5, 10, 15, 25 and 50 cents, with colorful and distinctive designs. All denominations were fractions of a dollar, hence the name Fractional currency. The first issue of fractional currency was called Postage Currency since these notes had as their central vignette the five and ten-cent stamps of the day. Since print quantities were generally large for these notes, many are easily available at modest prices in circulated condition, making Fractional currency an attractive option for beginning collectors. 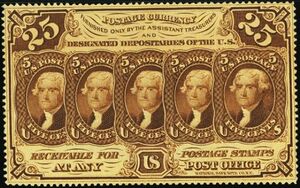 Following the outbreak of the Civil war in April 1861, people began hoarding coins, and on December 28, 1861, the New York banks suspended specie (coin) payments for paper money. As a result, all coins soon disappeared from circulation, and it became impossible for merchants to make change to their customers.

Several attempts were made to try to remedy this critical situation. Some merchants issued private tokens or scrip to make change, but this was only accepted locally, if at all. They also tried using postage stamps as change. In fact, President Lincoln even signed a law in mid-1862 that officially allowed postage stamps to be used in place of coins. But as you can imagine, these circulating stamps soon became a dirty/sticky mess. One idea was to place one or more postage stamps in specially made envelopes with the sum of the stamp denominations printed on the outside. Another idea (patented by John Gault in August 1862) was to enclose postage stamps in brass holders with mica fronts to be used for advertising purposes. These Civil War Postage Stamp Envelopes and Encased Postage Stamps are now eagerly sought by some collectors.

In July 1862 the U.S. government authorized issuing 5,10,25 and 50 cent notes. This first issue of fractional currency, based on designs by U.S. Treasurer Francis E. Spinner, bore images of current 5 and 10 cent stamps and is known as Postage Currency. These notes were first issued to the public in September 1862, and soon after there were enough in circulation to help merchants make change as needed. However, it wasn't long before these notes were being counterfeited, and this led to a new issue of Fractional Currency being authorized in March of 1863.

See the Fractional Currency Issues and Types articles below for an overview of the five issues of fractional currency that were issued between 1862 and 1876.

Fractional currency was printed in five Issues in denominations of 3, 5, 10, 15, 25 and 50 cents. The first issue of fractional currency was called Postage Currency since these notes had as their central vignette the five and ten-cent stamps of the day. A basic Fractional Type set would consist of 24 notes (or 25 counting the 3rd Issue 15-cent Grant/Sherman specimen, which was a one-sided note only printed for Fractional Currency Shields).

This writeup by Benny Bolin provides an overview of the Issues and Types of U.S. Postage and Fractional Currency, along with images of several of the notes.

This Wikipedia article includes front & back images of a complete type set of Fractional Currency, along with a listing of varieties. 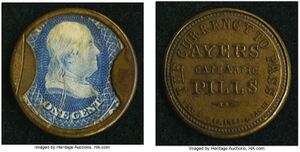 The above two 2012 Paper Money articles by Fred Reed provide an overview of Postage Stamp Envelopes, along with a list of known varieties.

This 2003 Paper Money article by John and Nancy Wilson provides biographical information on Francis E. Spinner, who served as U.S. Treasurer from 1861-1975..

This Index page has links to all 80+ articles on U.S. Postage and Fractional Currency that have appeared in the Paper Money Journal since the first issue in 1962.

This guide is perfect for the beginning/intermediate collector of Fractionals. It is an easy-to-read reference, with rarity and price estimates, that goes well beyond the basics, but is less in-depth than Milt Friedman's encyclopedia.

This reference is for the intermediate/advanced collector and includes in-depth information on all facets of U.S. Fractional Currency.

This standard reference guide on all types of U.S. paper money has a section on Fractional Currency, including valuations.

This is a link to the Heritage Currency Auction Archives for Fractional Currency.

This is a link to the Heritage Currency Auction Archives for Encased Postage Stamps.

Retrieved from "https://cpm.mywikis.wiki/w/index.php?title=Collecting_U.S._Fractional_Currency&oldid=2226"
Cookies help us deliver our services. By using our services, you agree to our use of cookies.