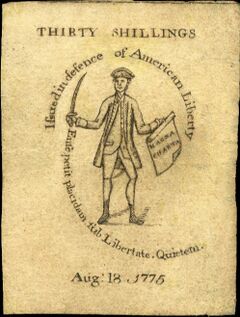 The earliest U.S. Colonial Currency was issued by the Massachusetts Bay Colony in 1690 to pay for a military expedition to Canada during King William's War. Between 1690 and 1788 all 13 of the original colonies plus Vermont issued currency denominated in pounds, shillings and pence. However, each colony had different valuations for their pounds, shillings and pence, complicating commerce between the colonies. Some of the Pennsylvania, Delaware and New Jersey notes were printed by Benjamin Franklin, and some of the Massachusetts and New Hampshire notes were printed by Paul Revere, which enhances their value.

This Wikipedia article provides a brief history of early American currency, along with a Thirteen Colony set of colonial currency from the National Numismatic Collection at the Smithsonian Institution. 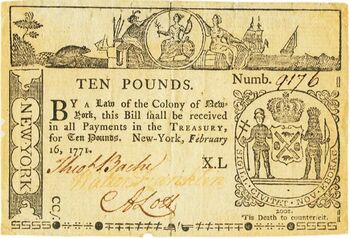 The following table lists the First & Last Year of Issue, Number of Issues and Number of Types (denominations) for each of the 13 original colonies plus Vermont.

This is a link to the online Newman Numismatic Portal Edition of Early Paper Money of America by Eric P. Newman, listing all Colonial Currency Issues (by Colony). Each issue links to a page with historical information and note images for that issue. 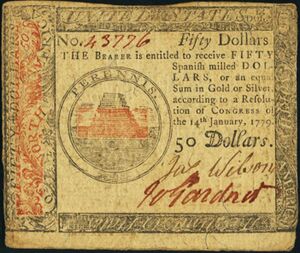 This is a link to the online Newman Numismatic Portal Edition of Early Paper Money of America by Eric P. Newman, listing all of the Continental Currency Issues. Each issue links to a page with historical information and note images for that issue.

This Index page has links to all 35+ articles on Colonial & Continental Currency that have appeared in the Paper Money Journal since the first issue in 1962.

This is the standard reference on Colonial and Continental paper money, and is now publicly available on the Newman Numismatic Portal. Click on the title link above to View/Download this reference book.

This standard reference guide on all types of U.S. paper money has sections on both Colonial and Continental Currency including valuations.

This article on EH.net (Economic History Association) provides an in-depth overview of money in the American Colonies, and how it evolved over time.

This is a link to the Heritage Currency Auction Archives for Colonial & Continental Currency.

Retrieved from "https://cpm.mywikis.wiki/w/index.php?title=Collecting_U.S._Colonial_and_Continental_Currency&oldid=2298"
Cookies help us deliver our services. By using our services, you agree to our use of cookies.